young musician of the year

Our annual Young Musician of the Year competition took place on Wednesday 9th January. A huge well done to everyone who took part and many thanks to our adjudicator, Miss Isabel Horning from Kirkintilloch High School who provided excellent feedback and had the very difficult task of choosing our winners.

Our senior winners will now represent Ardrossan in the North Ayrshire final on Tuesday 5th February in Garnock Community Campus. Watch this space!

Our senior Music pupils performed at the Music Cafe in the Royal Concert Hall on Wednesday 19th December. It was a lovely concert and we received excellent comments from the audience. Well done to all involved! 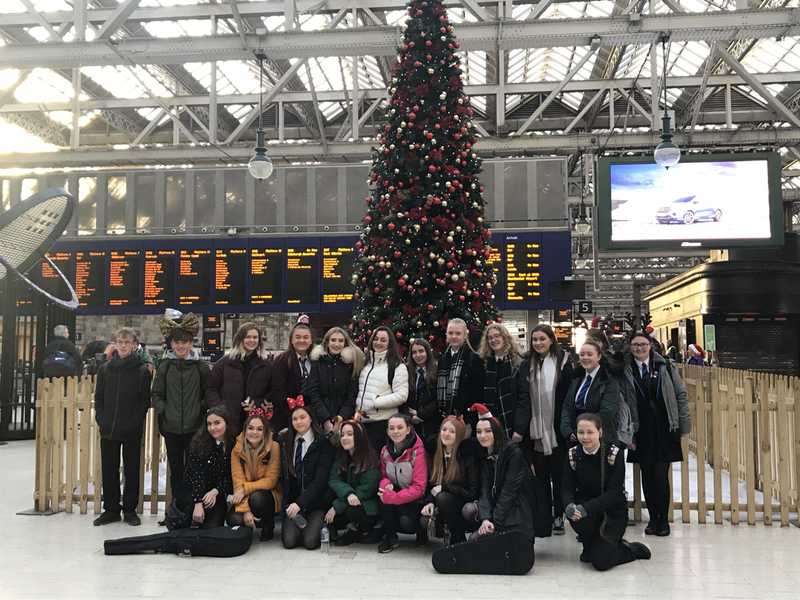 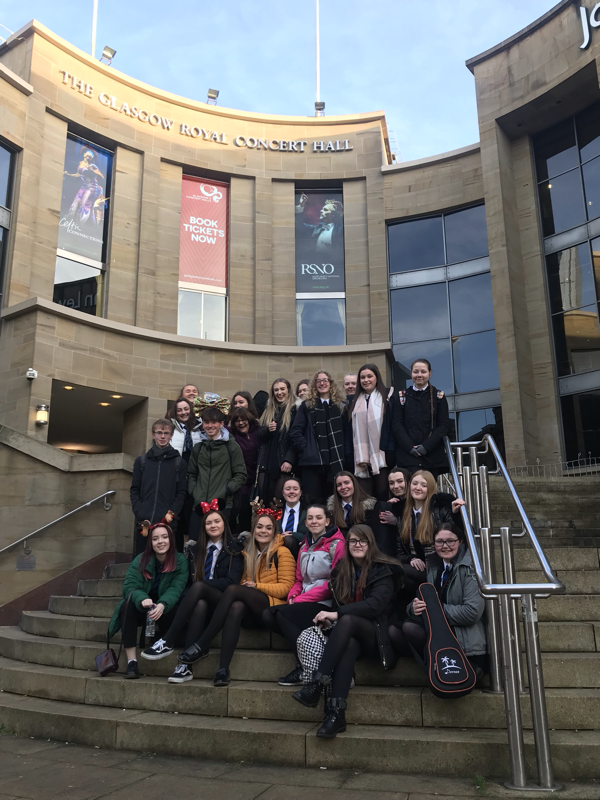 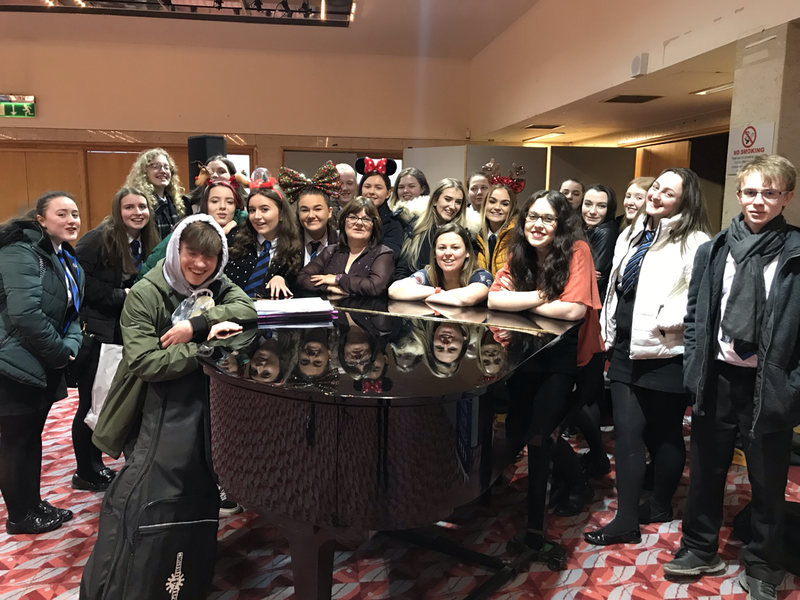 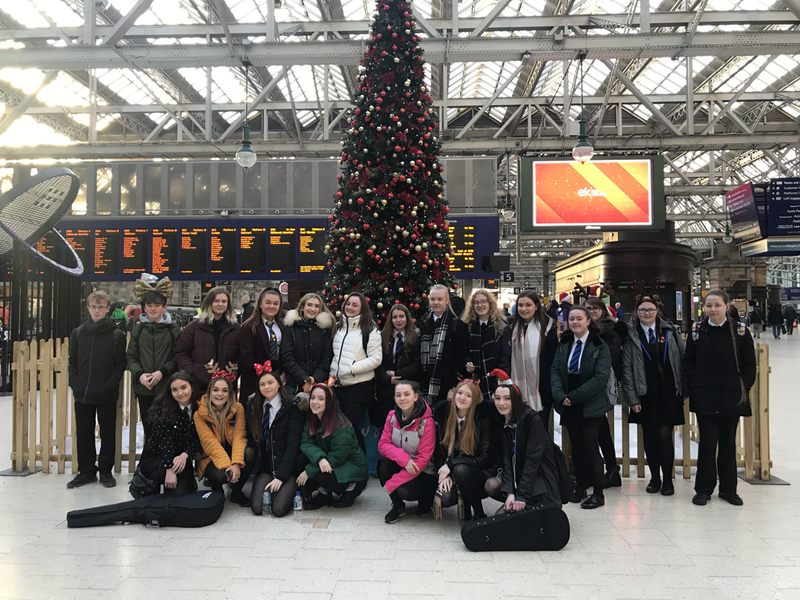 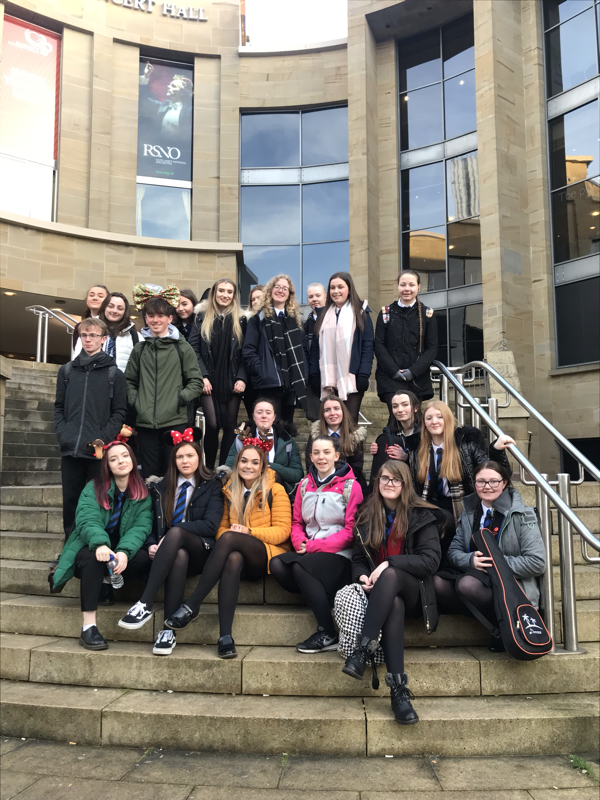 Junior Choir have been busy...

November and December was a busy time for our Junior Choir. From performing in the Ardrossan Churches WW1 memorial concert, to Christmas carolling in Asda and Castleview And Arranview Care Home’s and taking part in the many School events....our Juniors certainly deserve their Christmas break!

Pupil of the Month (November)

Very well done to Erin and Anna, our pupils of the month for November.

pupil of the month (October)

Very well done to our October pupils of the month, Blythe and Danielle. Blythe is in our S3 Music and Music Technology classes and is working very well, she is also a valued member of the school band. Danielle is in the National 5 Music class and is working exceptionally well. Well done, girls. Keep up the good work!

We have now had two very successful live@lunch events in the Drama Studio. This is an open mic style event giving our pupils the opportunity to perform for the first time at a low key event, or to try out new material or to perform as part of a group. The event takes place place on the last Friday of each month and a sign up sheet is in the music department. Why not add your name to the list, or come along on 30th November to see what’s involved, all for the bargain price of 20p!

pupil of the month (september)

Well done to our pupils of the month for September it was Sarah for S1-3 and Ramune for S4-6. For October in S1-3 was Blythe and for S4-6 was Danielle. Very well done girls! Keep working hard and it might be your turn next month! 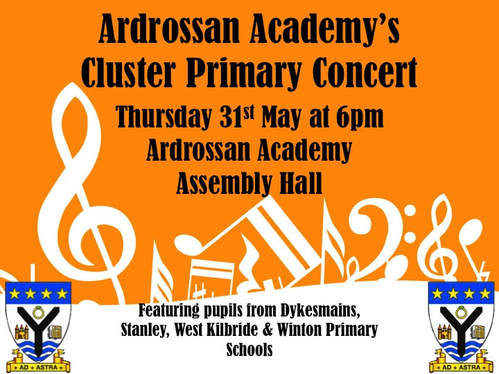 Our Primary Cluster Concert takes place on Thursday 31st May at 6pm in Ardrossan Academy Assembly Hall.  Below are the lyrics and backing track to the Primary Cluster song we will be singing at the concert.  Pupils involved in the cluster choir should use them for practice purposes.

A little bit of History....

Some forty to fifty years ago, Ken Hetherington was Head of Music at Ardrossan Academy.  Under his leadership, the Academy’s orchestra, choirs and other ensembles won many prizes at the Ayr Music Festival and gave concerts far and wide, including at St Giles Cathedral in Edinburgh. Under his inspiration a good few pupils went on to have distinguished careers, in music and other fields, as the author Janice Galloway has gratefully attested.

The Royal Academy of Music in London is just installing Crystal Lights in its new Susie Sainsbury Theatre.  Each light will be named to commemorate an outstanding teacher who was a "Shining Lights" to students, and one will be dedicated to Mr Hetherington.  The nomination for this dedication came from Professor Roy Howat, an Ardrossan Academy pupil at the time and who has since achieved international distinction both as a performer and a scholar; Roy is presently Keyboard Research Fellow at the Royal Academy of Music, as well as Professor of Music at the Royal Conservatoire of Scotland.  In Roy’s words, "Ken was a superb musician and an inspiring teacher who really cared for us, and who could impart important professional skills in what sometimes seemed like casual conversation.  Many of us remember him with enormous affection, and it seems very fitting that he be remembered in this way". 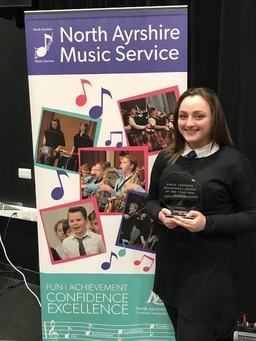 A very well done to all our musicians who performed in the North Ayrshire Young Musician of the Year finals on Tuesday 6th and Wednesday 7th February.  Rachel Lawson performed in the Young Singer and Linzi Smith in the Young Musician on the Tuesday night and Mackenzie Smith, Linzi Smith and Anna Reid in the Traditional competitions on the Wednesday night.  A very well done to Anna Reid who won the Young Traditional Singer of the Year award.

A group of our musicians and singers from S1-3 were given the opportunity to visit the Royal Concert Hall in Glasgow on Thursday.  They watched, danced and clapped along to an amazing performance by Blazin' Fiddles, as part of the Celtic Connections festival.  The band were supported by the RCS Junior Academy Scottish Music pupils, where our very own Anna Reid performed a beautiful version of Auld Lang Syne.

YOUNG MUSICIAN OF THE YEAR COMPETITION 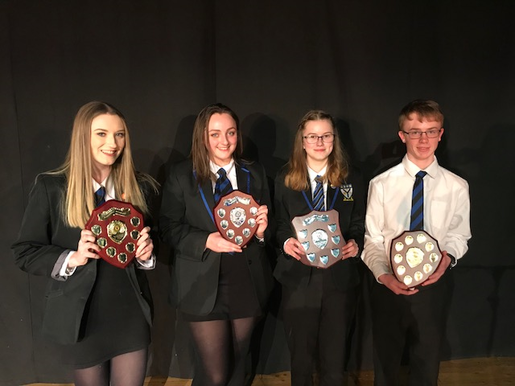 Very well done to all pupils who competed in our Young Musician of the Year competition on Wednesday 17th January.  Our winners were as follows:

All pupils performed extremely well and it was a very difficult decision for our adjudicator, Laura MacMillan from Belmont Academy in Ayr.  It's not easy to perform in front of an audience, yet every young person performed with confidence and outstanding musicianship - they are a credit to Ardrossan Academy.  Linzi Smith, Rachel Lawson, Anna Reid and a number of our Young Traditional finalists will now compete at the North Ayrshire Young Musician of the Year finals at Garnock Community Campus on Tuesday 6th and Wednesday 7th February.  Good luck to all our performers! 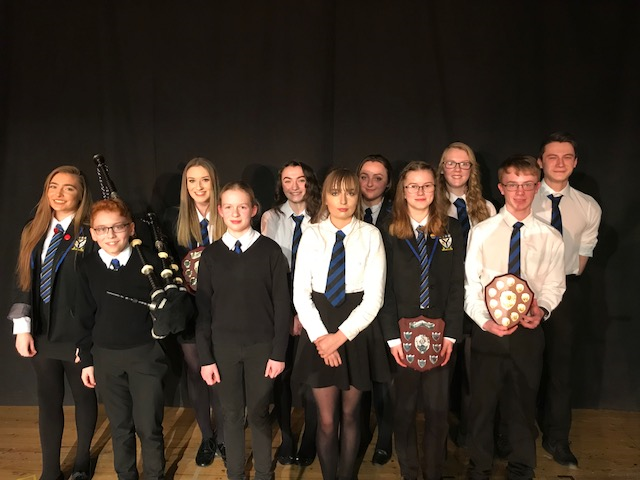 Auditions for the school show will take place on Monday 6th and Wednesday 8th after school. Time slots for all those wishing to audition will be placed outside Miss Cruickshank and Mrs Ross's rooms at the end of the week.

Some of the audition packs are missing some important information. Please check with Mrs Ross, Miss Mitchell or Miss Cruickshank to ensure you have an audition pack with all the information before auditioning. This is your responsibility.  Please also let us know if you no longer plan to attend.

Rehearsals will take place every Monday and Wednesday after school, so it is vital that you are able to make these rehearsals.  If you have any questions or indeed any ideas of suitable shows, please speak to Mrs Ross, Miss Cruickshank or Miss Irvine.

Pupils of The month - september